We're having summer weather for a couple of days so I'm on the porch & will start a letter.

I've started my Christmas shopping at a Bon Ton sale plus 10% coupon off.  I noticed  Dale could use a new satchel carrier or bag & got one for him.  It is very nice & I'm sure he will like it.

Also I ordered new blinds from Penneys for the eating area.  They are top down or bottom up shades.  I like the idea of having the top down to let light in & the bottom down to protect form sun & privacy.  Altho the trees have grown together & give privacy from the school yard.

This next week Dale will be on vacation & I hope he will get them up for me.

Barb has been looking for a med. blue denim shirt.  She looked in Madison, Erie & Jamestown.  Yesterday she found just what she wanted at Bon Ton.  She didn't expect to find one here so that was a nice surprise.

When Eddie plays football, do they wear all the equipment that Andy's age does.  We were wondering about that as he is still in grade school.  We should have sent you Eddie's picture but Barb wants to wait & finish the film.

Had a letter from Ruth.  It must be this weekend that Rachel's baby Jack Franklin Morressey will be baptized by Arland in Beloit.  David's parents will be coming form England.

She had to have a plumber come as she had plugged drain pipes.  A new connection so they could use the Roto rooter.  That's always a budget buster.

I go to the bank once a month & I list my needs & then figure out how much money I'll need by 20's, 10's, 5's, etc.  It usually takes a little while to make it come out even, but I manage to figure it out.  Then I have envelopes for flood, hair, spending, church, etc.  It works for me so I don't overspend.

Your letter came today with the pictures of Andy.  It is such a good picture with a nice smile.  My handsome grandson!  He got a nice hair cut.  How many extra pictures did he have to exchange or don't they do that.  I'm sure a lot of girls would want his picture.   Thanks so much. 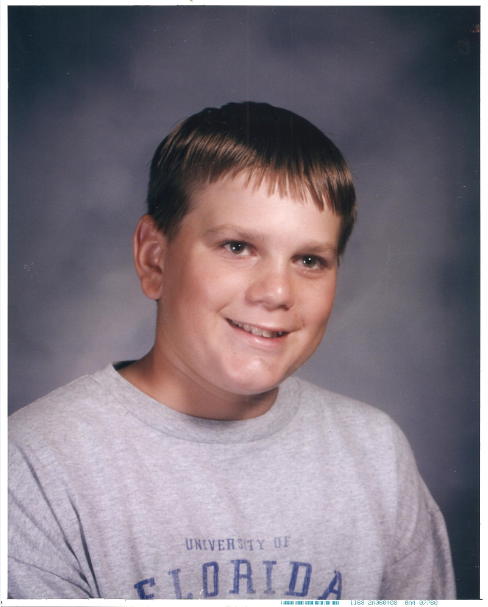 I've also been watching the tennis U.S. Open & they have been very interesting.  Tonite the Williams sisters play for the title.  Should be interesting.  Barb & Kim were hoping Jennifer Capriati would beat Serena Williams so they were disappointed.  Barb was rooting for Agassi & he lost.

Last nite I watched the Mets vs. Marlins.  It was a seesaw game but the Mets prevailed.  I'm sure you've noticed it's too little too late but I'll be glad to see them hit the 500%.

Dale plans to put up my new shade in the eating area & he will paint the basement shower.  he also got a new shower head.  So his vacation won't be spent only working on cars.

Yesterday Barb went back to Bon Ton to get a 2nd denim shirt but they were all gone.  She was disappointed.

It's still warm so I turned the AC on.  And Dale was soaking up the sun in the back yard.

Dale got the new shade up but he said he'd never put up another one.  He doesn't think much of it but I thin kit will be O.K.  Kim likes the ones they have in their bedroom.

This A.M. he has been scraping the loose paint from the basement shower.  He is so particular.  Next it's to wash it down good.  Dry out & then painting.

We had rain during the night & this aft it is turning out nice.  By the end of the week it will be jacket weather.

We're getting lots of nice tomatoes from the garden.  Green peppers are good, too.

I watched a lot of football on TV yesterday.  There were some good games & I enjoyed them.

Want to get this mailed.