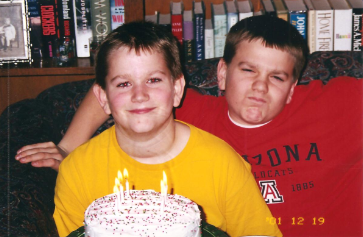 This A.M. I made a coffee cake & started making the regular choc. chips plus Spritz & Russian Tcakes.  But I forgot to add the egg to the Spritz so they are crispier. Will have to make another batch on Mon.  They taste OK & will get eaten. Plan to make 2 more recipes besides the Spritz.  One dessert will be Viennetta & cookies.

Yesterday we went to the Lakewood Mall in the rain.  It was rain needed.  I found a pr. of brown slacks which color I haven't had for ages -- at Sears.  At Bon Ton I found a cotton blouse to go with them.  A stripe with a tan background.  With coupons & mark down, it cost $11.88.  I took a "lg." but it is a little "roomy" but since it is 100% cotton, I expect it to shrink.

I sent a card to Joyce & it came back -- wrong address.  I don't have Joan's latest address either.

It seems that Eddie must like playing in the school band.  Hope he keeps it up.  And his Cub Scouts group sounds very active.  That is nice.  He will be old enough for Boy Scouts.  Hope he keeps it up.  I know Larry really liked scouting.  Bruce being active in Scouting made a difference.  And Mr. Myers was a good leader.  He is in the Rouse home now.

I'm watching golf and what a beautiful section of Calif. they are playing in.  Southern Cal. in the mountains.

The Mets have been busy with trades.  They should have an extra special infield.  Think Eddie will have to wait until baseball season to get the shirt & hats he wants.

Got a card from Sylvia Yosten today.  Pete has prostate cancer -- he is having treatments.  Sometimes they work & sometimes they don't.  Jeff has moved to Kansas City, Mo. to be close to his 2 daughters.  The divorce hit him very hard.  Max is still in N. Carolina.  Karen married Bill Weldon & they are grandparents.  2nd daughter has a baby & no husband.  Lives at home.

This week Dale got his regular wage; vacation pay he didn't take, plus a day for not taking the 3rd week & a bonus check.  Think the bonus check was $800.00  Now they balance out what the 4 agencies make & divide by the workers.  Warren has the best record so other groups complained when their bonus wasn't as big so they came up with dividing it this way.  No smoking, no drinking, living at home, he doesn't spend much -- except at Big Lots & that's cheap spending -- so he should have a nice saving acct.  Not even car payments.  Some parts are costly but he does OK. He's happy & nice to have around.

Harry Johnson who owned the Johnson Hotel died age 94.  Wife Ethel and 2 daughters were in church today.   Kris was y our age Paul.  She lives in Fla. & I'm sure Ethel said they had an ice cream or some sort of food franchise & it looks like it.  She has gained weight.  Other daughter, whose name (Karen, maybe) I can't remember lives in Warren & looks good.  She left the church for a Pentecostal church.  Then she divorced her husband & I don't' know if she goes to any church now. 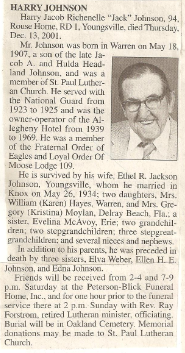 Other news -- Masterson's will close the end of Dec. but will keep the warehouse & storage lockers they have.  So far it won't mean they won't need Barb to work taking care of Scott.  They didn't have to declare bankruptcy -- they saw the writing on the wall.  That is valuable property.

Maybe you read Loranger's declared bankruptcy.  The oldest son bo't the other 3 out so he was the lone owner.  One married Chris Cataldo -- 2nd for both --  one is in Calif. -- he married Chris Lundahl.  And one has the old Walker Dairy bldg. on the West Side for another part of the business that is successful.  Loranger's has a business in Hungary & that is still a going concern.  Sometimes the sons can't carry on the business left by the father.  This is tough on Warren as far as jobs goes.

[A repeat]  Barb picked a couple of pansies yesterday.  Imagine flowers in Dec.  They don't' know what is happening.  Neither do we!  No snow for Christmas.

Imagine Eddie is looking forward to his birthday & Christmas vacation.

I know you'll have a wonderful Christmas. 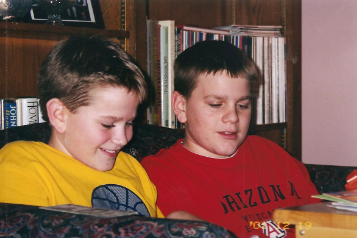