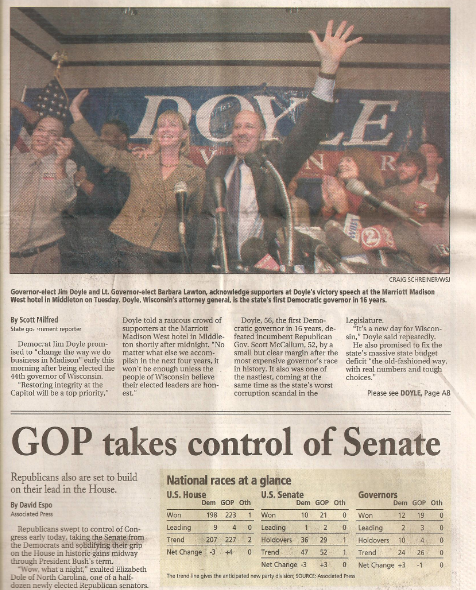 We have patches of snow but don't have to shovel.  It's been cloudy & I've been lazy & had a nap this aft.  Been trying to get a cold & have had a cough.  I tired Coldeeze cough drops & they are good.  They have zinc in them & that is suppose to be good.

Dale got some frames that fit the 2 bedroom windows in both front bedrooms.  Or he cut them to fit & then he plans to put plexiglass in them & they will fit in our windows & help insulate even more.  My room gets cold in the winter but my electric blanket keeps me warm.

I hope things work out for you jobwise.  I don't know much about it, but I'm sure it will be very interesting.  Either way, I know you'll be happy as things are getting accomplished at the library.

When you get today's paper, Warren, Saturday, Nov. 2, be sure to read the letter to the editor by a 9th grade student at Youngsville Hi.  Very well written letter from one so young.

Thanks for the pictures of the boys in their football uniforms.

I didn't put the front door light on for Trick or Treat.  Why?  Because when Lar & Kim are here, I don't c are to be running to the front door.  Carey's are in Fla. & no lights are on this end of 3rd.  We had Andy's favorite dinner, or one of them, stuffed pork chops.  I found a new recipe for corn pudding & it was well received.  The difference is it called for 5 slices of bread cubed & put into the casserole & then you pour the corn, egg, milk mixture over them & bake.

The political ads have been so negative.  I'll be glad when Tues. is over.  I'm sure this has been an extra busy time for JoAnna & she has been run ragged, as the saying goes.

At BiLo, Barb picked up a load of Swedish rye bread & it is so good.  Makes me want to plan a Swedish dinner for Christmas Eve.  But they aren't too fond of meat balls, rice pudding, etc. that make up the meal.  I'll have to start thinking about it & see what I can come up with.  Wish I had learned how to make "korv" & "sylta" when  my mother made it.

Called Warren H. yesterday to find out about Anna.  She was taking a nap.  They changed her medication & she is back to her exercise classes at the hospital so she is monitored them.

The Coldeeze cough drops are really good.  I've had a nagging cough & it really helped.   You don't eat them like candy.  You take them at 4 hr. intervals & never on an empty stomach.  I took one before church & I didn't cough.

Since Dale doesn't need a regular Sunday dinner, I made a recipe that was in one Sat. paper awhile ago.  Take frozen shredded potatoes.  Fry them 8-10 min.  Add diced ham, onion, seasoning, etc.  T hen pour beaten eggs over & cook til firm.  Add shredded cheese.  I'm sure you've made something like that, Paul.  Dale thought it was good; so did I.  It was filling & I couldn't finish mine.  An easy meal which I like.

This is Dale's early week & I heard him get up at 5:30.  I turned over & the next time I looked at the clock it was 6:11.  Got up in a hurry -- he had to get his own cereal bowl, banana & milk.  I made coffee & got his mid A.M. snack ready.  Of course he can do it but I like to have it ready.  We both survived!  I don't like getting up in a rush & I like company for breakfast.  We both look at the newspaper but someone is there.

I put clean sheets on Dale's bed on Monday & when I made the bed I noticed the windows were up & it is such a professional job.  They are double glass Andersen windows but still it feels cold esp. when my room doesn't get much heat.  I couldn't "push" Dale, Paul like I did you!!!  But I wish he could have wanted to go to some kind of technical school to improve his natural ability.  They are in the place of the screens, not needed in winter.  (out of place sentence)

I'm sitting in my chair after walking to Calvary Baptist (outside bldg) to vote -- so I did my duty.  Even remembered the question at the top of the ballot.  Not much to vote on.  Gov. Lt. Gov. & state rep.  I had to walk carefully as there are wet leaves on bad sidewalks.  It's a nice day so the walk was invigorating.

Last nite was LCW - -our thank offering program.  Patty W. Phillips was in charge.  Barb took me over & Janice Carlson took me home.  It will be interesting to see the returns tonite.

Congratulations to JoAnna on a job well done.  Imagine you celebrated into the morning hours.  When I went to bed at 10:30 p.m. I noticed that Doyle was creeping up & I thought then "I bet he will win".  And he did.  It must have been a wonderful feeling as well as a relief that your hard work paid off.  What comes next?

Lynch won in the Warren area but I bet he was scared for awhile.  It was a very close call.  I think a better candidate could have beat him.  He'll do better (Lynch) if he lets go of a little ego.

It's a sunshine day & I needed a prescription filled.  So I got a ride over with Barb.  I went to CVS, cashed a rebate check, went to the library & got 2 books.  Final Target by Iris Johansen & Three Weeks in Paris by Barbara Taylor Bradford.  Got Christmas stamps at the P.O.!  Dale had a mtg at work so he wasn't home for lunch.  I just finished washing the kitchen floor so with the exception of fixing dinner, my chores are over for today.

Tomorrow we go to Erie -- that is why I went to the library -- to have a book to read on the way.  It is suppose to warm up & be a nice day so we're lucky.  Hope we find things we want.  Many stores are having sales.

It was good talking to JoAnna last nite.  I'm sure she is in for a lot of interesting experiences.
Posted by Retiring Guy at 5:13 PM