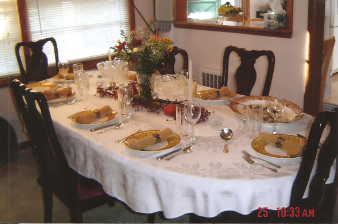 Dale's Dr's office called yesterday & wanted Dale to have a culture of his nail (infected) so he is to see a podiatrist just about now.  His insurance required it.  They want to get it cleared up so it won't go into his bloodstream.

I need to wrap Christmas gifts but it's been too warm, weatherwise, to get into it.  My bedroom is crowded with boxes to be wrapped.

Barb went to Jamestown today but she couldn't get what she wanted.  We won't go gain until the last Mon. or Tues of the month.  The day after Thanksgiving is too crowded, altho a lot of people are shopping earlier.

John called last nite & I visited with him & then talked to Gen.  It's pretty hard to have a conversation with her anymore.

We'll have Thanksgiving dinner around 4-5 pm, whichever hour is best for Larry & Kim.  I don't mind eating later as it isn't such a rush.

I don't recall my oldest son making a 3 plus average in high school, altho he was more than capable of doing that!!!  Tell Andy & Ed they are doing a good job & make the honor roll next time.

Tonite I'm trying a new recipe.  Flatten the chicken breasts, season them & stuff them with finely chopped broccoli & shredded cheddar.  Fold over, add chicken broth & bake covered. You could also add a slice of ham first.  I'll let you know how they come out.

I'm sure people in Wisc are holding their breath because of what Iowa is doing to Wi.  With one player hurt, it makes a big different as they can't seem to do anything.  Like against Mich. State.

I'm watching the World Poker Tour on the Travel Channel.  I don't know or understand poker at all, but it is fun to watch.  They can win a lot of money if they are the final winner.

The last 3 Sat. nites, Barb & I have played  game of Scrabble & she always beats me.  But tonite I prevented her from using all 7 letters.  She could have scored over 100 points but I prevented it. She still beat me but that's OK.  It's fun to play a game.

It was scary today but Pittsburgh came out the winner over Cincy 19-14.  The QB couldn't do as much today.  Barb is happy as Buffalo is beating St. Louis.

Barb & I went grocery shopping after I got home from church.  The turkey is thawing in the fridge.  Lar stopped over & said Kim would make the pies.  I'll make the pumpkin pie (I like mine best.)  Kim will make the apple cranberry pie.

Barb has been wrapping gifts & I'll start on Fri.  I'll use the D.R. table & will cover it with a plastic tablecloth so I won't scratch it.  The pkg. will be sent Mon the latest so it should be there for JoAnna's birthday.  We'll be putting the tree up soon.

Dale got a turkey from work so it is in the freezer for another time.

Tues pm.  When we were coming out of the Mall yesterday, Barb stopped to read a saying on the car -- "Friends don't let friends vote Republican".

Today (Wed), I cooked my sweet potatoes & fixed them so they're ready for Thurs.  Cleaned the turkey & cooked the giblets & have broth for the gravy.  Will use my good dishes & got them out on the table.  So I'm pretty well prepared.  Sometimes it's easier to plan a big meal than to plan supper.  Didn't know what to have tonite so I fixed macaroni & cheese & weiners & tossed salad.  I like it but I'm not sure about Dale liking it.  Barb ate it -- guess she didn't feel like doing anything.

I've been watching the Food Channel lately & have gotten a few hints.

In looking over Bon Appetit the Escarole Soup with Pasta & Meatballs sounds good.  But I might like to substitute spinach.  Plan to try it.

Back to the Food Channel -- noticed they made the stuffing in a frying pan -- sauteed the onion & celery & added the bread & broth & then baked it on the oven.   Plan to do that in the A.M.  They added more veggies but I'll stick to just celery, onions & seasoning.  There is also a blueberry pie recipe that I'd like to try.  It uses frozen B.berries.

It's 9:24 pm & guess what Dale is doing -- washing his white car.  He will put it in the garage he rents & use the Blazer.  He couldn't put it away dirty.  Luckily the weather is mild -- it is suppose to change by Fri A.M.  Colder & snow flurries but it will be 38 on Mon the 1st day of hunting when the hunters want it colder, & snow to track the deer.

Thanksgiving is over & I'm having a piece of pumpkin pie.  Larry & Dale chose to have pump. pie so I had a piece of Kim's apple cranberry pie.  And Thanksgiving wouldn't be complete without a piece of pump. pie.  I took a piece of Kim's pie for Dale & Lar will finish it at home. I like eating later as then I don't have to rush around.  The turkey was good.  Dale won't come home for lunch Fri -- he doesn't want to lose his parking place.  He'll have turkey sandwiches.

Tomorrow I'll know what to have for supper.  Leftovers.

Kim said Father Baker, retired Episcopal pastor, is not expected to live.  They live up the street now, just before Gustafson's.  I was surprised to hear that - his illness. 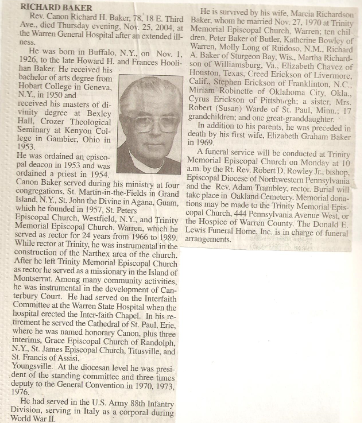