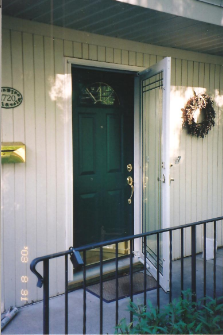 I did something today I seldom do on Sat. I worked. (When I bake it isn't work.)  First I washed a load of underwear, socks, etc. -- waited for Dale's dirty clothes.  Then I decided to wash the L.R. draperies.  With my extension brush, I dusted the walls, corners, etc. Washed windows & polished the furniture.  Need to vacuum the furniture, but that can wait til next week.  Got the draperies up & washed trinkets I have around.  So things are in order -- it's good enough for me.  Also washed the light fixture by the stairs & my fingers aren't as agile as they were so it took me some time to get it back in order.  Took me awhile to get the wires into the small holes.  I had the "dangles" upside down so I had to start over. Next week I'll get my bedroom in order & the kitchen.  Before I sat down I Put a pumpkin pie in the oven.  Fall is her e-- our first pumpkin pie.  Oh yes I washed 3 of the kitchen rugs & they are on the line.  It's a beautiful day & I didn't want to wait any longer.

Dale enjoyed his 3 days of school.  It's good to have him back. He is in the sun now & will now the lawn later.

Barb got a bike ride in this A.M.  She's so concerned she won't get all the miles in she plans on.  She has to go to Bert's to mow the lawn.  She's been sitting in front of the TV watching tennis.  That is her priority.  Job comes second or third.

Last week Warren got whipped by Oil City, but the Wrrn. QB was sidelined by some infraction.  Last nite he played & Wrrn. won big.  The QB's dad is Barb's doctor.  They have all boys, one in college at St. Bonaventure & 2 in high school & I'm not sure about any younger ones.  Your next letter will tell me about Andy's games. 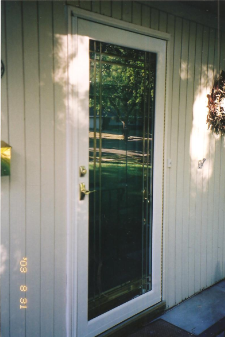 I'm set to watch the Mets at Philly.  Dale likes salads so I made a tossed salad with chicken.  It was good.  And the pie was so good -- one of my favorites.  Barb & Dale will have their dessert later.  Yesterday's USA Today mentioned that people aren't ordering dessert because they dont' have time & dohnt' order them because of the economy slowdown.  My problem many times, I don't know what to make.  Mostly it's pies but a change is nice sometimes.

I sent out the invitations for the cottage meeting.  Howard Ford called today & said they'd be away.  The other 2 couples are Denise Johnson's folks & Lilith isn't well so I don't really expect them.  And I doubt if Jr. & Lois Himes will come as Lois isn't well & having kemo therapy.  The others are widows, Marie Mathis, Betty Casey, Irene Bloom, Lois Mattone, Alice Nasman (Wayne's mom), and Jessie Franberry.  All widows.  I would think most of them will come.  Did I say these are 9 home & 7 Bible leaders, so someone takes more than 1 lesson.  But I'm not doing it.

Am I glad I know what we're having for supper tonite!  Hamburgers & corn on the cob.  Today I cleaned the kitchen my way.  Washed all the cupboards on the outside, cleaned off the counters.  Moved the microwave, toaster, & carts --vacuumed & washed the floor & will have to go over it before the 17th.  But to my eyes things look OK.  I'll stilt have to dust etc. & decide on refreshments.  Tomorrow I'll highlight my bedroom.  After my 2 pm soap, I took a shower, got dressed & sat in my chair & took a nap.  Barb did the D.R. windows & the ones in the eating area -- on the outside.  And she will clean the D.R. fan as I'm not steady on a ladder.  I'm just glad I can do this much.

Today I got a big order from Schwan's.  Tried their individual lasagna & pot pies.  Got sausage links as Dale likes them & tried their peas.  And the chicken which I always get every 2 weeks.  They must have a hard time getting driver salesmen.  I've had several different ones -- the hours are very long -- most come from Titusville.  The last one up & quite & it didn't surprise me to have a new one this week.  He said he likes the job but the hours are long.  I could see he was marred so a job is a necessity.  I told him I usually only order chicken but wanted to try the lasagna & pot pies.  I hope they are tasty as it would be a meal plan booster.

Last nite Marie Mathis called & we talked for about 40 min.  About church, about some bringing their children to S.S.  Tim Passinger will be S.S. superintendent so that is a plus. We're getting different younger people to each S.S. & that is a plus.  Our pastor will start Oct 15th.

I'm glad I'm not buying clothes & shoes for children now.  But you are making much more than Dad did.

Just walked to the mailbox on 5th & mailed birthday cards to Andy from Dale & mine.  Just think 16 yrs old.  Where has the time gone.

Thanks for the pictures of your front door.  I like it a lot.  It's nice you like to keep your home & yard in such good conditions.  A good hobby.  And it is nice that you work together on projects.  When Dad worked I was the go for helper & he did the real work.  I remember how hard he worked trying to get elec. wiring thru the walls for new plugs.  Old houses don't have many elec. outlets & Dad added a lot of them.  He'd be in the room trying to get wires thru & I'd be at the opening trying to pull it thru.  Many happy memories.